The general requirements of lease contracts are provided by civil law, and lease is treated as so called ‘defined contract’. According to Polish tax regulations, tangible and intangible assets can be stated as equipment of a lease contract.

A lease agreement is concluded for a specified period of time equivalent to at least:

Pursuant to the Accounting Act, an operating lease agreement is an agreement under which the SSER:

Also, if the lease agreement does not meet any of the following conditions:

Pursuant to the Tax on Goods and Services Act, the operating lease is treated as provision of services.

For each leasing payment (own contribution, handling fee, lease instalment) a VAT invoice is issued.

When purchasing a passenger car, companies managing fleets are entitled to deduct the entire amount of VAT. Other companies may deduct only 60% of its value.

In the case of purchase of passenger cars by companies, pursuant to the Tax on Goods and Services Act (Article 86 Sec. 3) the input tax amounts to 60% of the amount of the tax stated in the invoice (…), however not more than 6,000.00 PLN.

This provision regulates instances in which the main object of the taxpayer’s activity consists in resale or transfer for payable use of cars (vehicles) under lease agreements. This means that when purchasing a passenger car, CFM companies have the right to deduct the entire amount of VAT. Other companies, which do not fulfil the aforementioned condition, are entitled to deduct VAT according to the principles set forth above upon vehicle purchase as well as its lease.

In the case of lease, 60% of the amount of tax charged on the lease instalment and other payments following from the agreement concluded is subject to settlement. The sum of deductions with regard to one car may not exceed the amount of 6,000.00 PLN.

If upon termination of the lease agreement the user decides to purchase the car previously used, then the user is entitled to a new VAT deduction limit. This results from the fact that the purchase/sales agreement is treated by tax authorities as an agreement separate from the lease agreement. In this case, the User is entitled to deduct VAT following from the invoice documenting the purchase in the amount of 60% of the tax charged, but not more than 6,000.00 PLN.

During the term of the lease agreement depreciation write-offs (made by the financing party under operating lease and by the User under financial lease) may be credited towards deductible costs only in the part that does not exceed 20,000.00 EUR. Depreciation write-offs on partial value of a car exceeding an equivalent of 20,000.00 EUR may not be classified as such costs. In specific cases, other depreciation methods and the so-called individual depreciation rates may be applied. At the same time, a similar principle is applied in the case of insurance premiums. Insurance premium is a deductible cost only in the part not exceeding 20,000.00 EUR, while the remaining amount may not be classified as such cost.

Deduction of VAT on trucks

The principles governing deduction of VAT on trucks are the same as in the case of any other form of financing. The entire amount of VAT (100%) may be settled by lease companies as well as the lessee.

* Cars and other motor vehicles with the allowable total weight of less than 3.5 tons

** Cars with the allowable total weight of more than 3.5 tons and motor vehicles with the allowable total weight of less than 3.5 tons, but fulfilling the statutory requirements (Article 86 Sec. 4 of the Tax on Goods and Services Act), i.e. special-purpose vehicles, buses and vehicles whose construction demonstrates that they are adapted to carrying load

*** In case of rental, if the services described above are provided for in the agreement along with financing, there is a limitation with regard to VAT deduction applicable to the rent.

‘Financial lease contracts’ are concluded for a limited period; the sum of lease payments established in the lease contract is not lower than the initial value of the lease object; the parties agree that the user (lessee) makes the depreciation write-off.

If at least one of the following terms is applicable, the contract is treated as a ‘financial lease’:

Contracts which do not fulfil the aforementioned requirements will be treated with respect to accounting regulations as an ‘operating lease’.

We encourage you to read our brochure. Beside you will find an excerpt from this brochure: Leasing in Poland. We update these brochures annually to ensure you have access to the most current information. 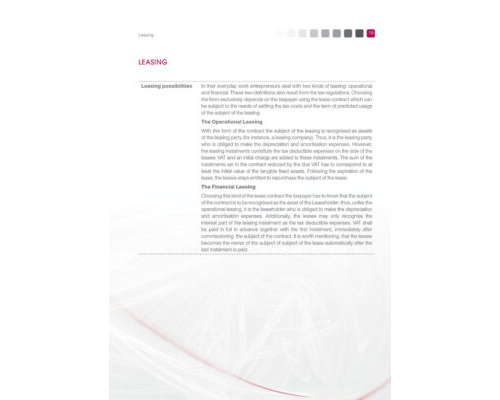