In recent years, Poland has become the undisputed leader in the investment market in Central and Eastern Europe (CEE). This is confirmed by growing investor confidence in Poland as a steady and comparatively settled market. As a result, in their search for high-quality assets, investors are increasingly looking at regional markets, such as Wrocław, Krakow, Poznań, Łódż, Tricity and Katowice.

This article presents a brief summary of the situation in the investment markets in Poland, along with some basic information on cities, employment and students.

Poland is the Central Eastern Europe’s (CEE) largest economy and consumer market and the European Union’s (EU) sixth largest economy. Poland was also the only EU country that escaped the recession in 2009, consistently recording stronger economic performance in comparison to the majority of other EU Member States.

GDP per capita conveyed in purchasing power standards is currently at 69% of the EU-28 (2015). Poland is also benefiting from growing purchase power (currently at €6,366.00 per capita per annum), this adds to higher consumer spending. The economy is forecast to grow almost twice as fast as the rest of the EU. Cumulative GDP growth of over 15% by 2020 is expected.

Poland has been a member of the EU since 2004, which assigned €101.5 billion to Poland for the period 2007-2013, together with €68 billion in cohesion funds. An even higher amount totalling €105.8 billion, including €72.9 billion under cohesion policy funding, was settled for 2014-2020. As a result, Poland is enjoying a rapid development of its transportation infrastructure with a number of motorway sections, development of new airports, as well as the modernisation of railway tracks.

The Polish economy is a part of EU with a coherency factor of over 80%. Germany is Poland’s largest trading partner with volumes of trade reaching in 2015 approx. €48.5 billion (27% of total exports) and €40 billion (23% of total imports). In terms of exports, Poland’s largest partners are the UK, Czech Republic, France, Italy, the Netherlands, Russia, Sweden, Hungary and Spain, and in terms of imports China, Russia, Italy, the Netherlands, France, Czech Republic, UK, USA and Belgium.

With a well-educated, reasonably inexpensive and highly driven labour force, Poland benefits making it the manufacturing and financial services hub of Europe, with various businesses setting up back offices for their European operations, for example, Credit Suisse, IBM, HP, UBS, Google, HSBC and Sony. With over 240,000 jobs in over 1,000 service centres, the modern Business Services Sector (BSS) is one of the main drivers of the development office stock in Warsaw and regional cities.

Poland having this resilience to the recent financial crisis, a strong economic performance, a conservative and safe domestic banking sector and a constantly developing and modern commercial real estate stock with the majority of well-represented asset classes, translate into substantial investment volumes recorded year-on-year. Poland is observed as a transparent and increasingly core European market.

Poland still remains the leading market within the CEE region in terms of diversity and liquidity; while the Czech Republic (approx. EUR2.2 billion) recorded strong performance in H1 2017, but Poland is expected to remain the pace setter. 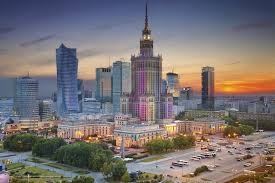 Poland is seeing a significant percentage of investment directed into the regions (including second and third-tier cities) versus the capital city, unlike most of its CEE peers, which is a sustained trend since 2013, which highlights the fact that Poland has been successfully underwritten nationwide by international purchasers.

The favouritism in the Polish regions is clearly towards international investors, who made up 97% of 2016’s volume and 85% of H1 2017. Warsaw’s non-primacy status in terms of population (3% of Poland’s) compared to, for example, Prague (9% of Czech Rep.) and Budapest (10% of Hungary’s) and the absolute size of the major Polish regional city markets, explains the attractiveness of these cities compared to others in CEE.

No permits for acquisitions of real estate are required in the case of entities with their seat in the European Economic Area (EEA). Consequently, Polish-based SPVs acting as purchasers, even if they are fully controlled entities outside of the EEA, are considered to be Polish.

The acquisition of a real property by a foreigner with its seat outside the EEA requires a suitable permit, issued in the form of an administrative decision by the Minister of Internal Affairs on the condition that no opposition is raised by the Minister for National Defence or, in the case of agricultural real properties, the Minister for Rural Development. The permit is given at the request of an interested party (a foreigner).

From 30th April, 2016 supplementary restrictions regarding the acquisition of agricultural real properties have been introduced and are binding upon most entities (including foreigners).

A ‘Special Economic Zone’ (SEZ) is a distinct administrative area which is intended for the conducting of economic activities on preferential terms.

Entities investing in SEZ’s are entitled to income tax exemptions, as well as total or partial property tax exemptions in some municipalities, and can rely on a variety of supplementary benefits.

As a leading economic, technology and cultural centre, Wrocław, in south-western Poland, while being one of the most rapidly growing metropolitan areas in the country. As a strong business centre, Wrocław is an attractive location for foreign investors and is home too many companies with Polish capital.

For more than two decades the city has been successfully attracting foreign direct investment and developing modern economy using enduring industrial traditions, qualities of the citizens and the academic potential.

Wrocław is also leading academic centre, across 26 universities, there are around 125,000 people studying in fields ranging from engineering, information technology and economics to finance and linguistics. Each year, the city produces over 32,000 graduates. Within Wrocław nearly 100% of student speak English, while there are more than 30 foreign languages are spoken in ‘Shared Service Centres’ (SSC’s) in the city.

In 2004-2012, the city of Wroclaw’s GDP increased by 45%, which means that it is the second (after Warsaw) fastest growing Polish city. The unemployment rate reduced from 8% to 2.6% between 2006 and H1 2017. The increasing population is also one of the city’s strengths. In 2005-2015, within the metropolitan area of Wrocław, the number of inhabitants increased by 50,000. Furthermore, students from other Polish regions and growing job migration significantly contributed to this result – in 2016 approximately 120,000 work permits were issued in the region for Ukrainian citizens alone. 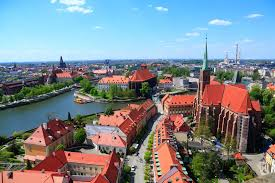 Wrocław having a business-focused approach and its support for foreign and Polish companies is widely appreciated and copied by other cities in Poland. The city was ranked ‘the best place to do business’ by ABSL (the Association of Business Service Leaders) and ‘Most business-friendly Polish city 2016’ by Forbes. This strong presence of global companies is continually changing the labour market and professionalising the business environment. Having this distinctive business-friendly attitude and the overall economic potential make Wrocław a very attractive city for new offshore projects.

With over 500,000 inhabitants, Poznań has a strong and diverse economy, and is the largest urban centre in the north-western part of Poland. Various companies from the modern business services, automotive and logistics sectors choose Poznań agglomeration.

The value of foreign direct investment since 1990 has already reached USD9.5 billion. Poznań appeals to investors with qualified staff and an attractive location – midway between Berlin and Warsaw, on the A2 motorway. Poznań International Airport is located just 15 minutes from the city centre and offers easy connections to the largest European hubs: London, Frankfurt, Munich and Copenhagen, with new connections having already started to Kiev and Lviv.

The city of Poznań is respected by business environment institutions, with the prestigious fDi Intelligence ranking by The Financial Times – Polish Cities of the Future 2017/2018, while also being recognised as a business friendly city. Poznań also took first place among the regional cities in this year’s Forbes ranking of Business Attractive Cities, within the 300,000-plus category. Three times in succession Poznań has been awarded the Outsourcing Star by the Pro Progressio foundation for the largest increase in students and graduates in UT and economic fields. 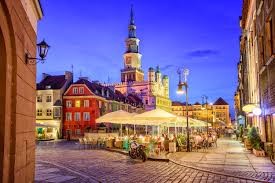 Poznań is famous for its entrepreneurship – occupying third place in Poland in terms of the number of registered small innovative New Connect companies. Poznań has the second highest registered companies (110,500) in Poland. While the city has also become a leader chosen by the European Commission in terms of culture and creativity in Poland.

Being the capital of Wielkopolskie voivodship, Poznań has over 86 service centres, which employ around 13,500 people, this shows that the city market is one of the fastest growing in terms of BSS centres in Poland. So far the largest companies in the Shared Services Centre (SSC) sector are: Franklin Templeton Investment, GSK Services, Allegro Group, McKinsey & Company, Roche and Nivea.

Tricity contains three cities: Gdańsk, Sopot and Gdynia and is the main business agglomeration in the north of Poland, with more than 1 million inhabitants in the metropolitan area (with neighbouring municipalities).

A significant asset of Tricity is its high quality of life thanks to sport and recreation areas, cultural and entertainment places and its proximity to the Baltic Sea. Tricity’s other assets are the presence of a number of universities, such as, the Gdańsk University, the Gdańsk Medical University, the Gdańsk University of Technology, the Naval Academy of Gdynia and the Marine Academy of Gdynia, which together create a very important academic centre of Poland. Over 100,000 people study annually at 23 universities.

Being the centre of the Gdańsk Industrial District, Tricity’s location by the sea is a unique feature. At present, Gdańsk is the home to shipbuilding, food processing, electrical engineering, energy and petrochemical industries.

The economy in Tricity is developing very well, as can be seen by the airport development, port investments (Deepwater Container Terminal), shipyards and the production and storage-logistics sector. Many BPO/SSC, IT and finance companies have chosen Tricity. The largest employers in the Tricity Metropolitan Area are: LOTOS Group, Energa Group, Ergo Hestia, LPP and Remontowa Ship Repair Yard.

With a population of over one million provides a large market for potential investors, and the labour market is also attractive because of the large number of workers, engineers, specialists and students (in the Tricity area nearly three quarters of the population are in working age).

As a rapidly growing city, Katowice has 300,000 inhabitants located in southern Poland. Collectively with the rest of the region, it forms the unique metropolitan area, which is inhabited by more than 2.2 million people.

As a significant academic, cultural and economic centre in this part of Poland, Katowice’s universities provide businesses with qualified human capital. There are 20 universities in the region with currently over 90,000 students.

With a skilled labour force, academic facilities, a positive location and the surprising character of the region, Katowice and the metropolitan area are the perfect place for new investments. In 2017, scheduled inflows to Katowice budget are estimated to be PLN1.8 billion and total expenditures are projected for PLN2 billion, of which 21.5% will be assigned to investment projects, including those planned by inhabitants.

The agglomeration is the home to over 80 Business Service Centres (BSE’s), which employ nearly 19,000 people. Companies such as IBM, General Motors, Capgemini, PwC, Accenture, Rockwell, Automation Teleperformance, Sapiens, Guardian Industries, Arvato, Bertelsmann, Knauf and many others have invested here. 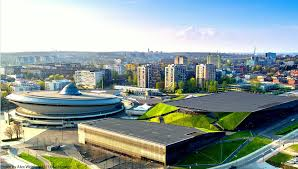 The city of Katowice is also an important centre for conferences and a venue for many international exhibition and fairs. Due to these great events, the city formed the ‘Culture Zone’, which facilities such as Spodek, a sports and entertainment hall, and the International Congress Centre, which collectively can accommodate 26,000 people at the same time. This zone is home to the European Economic Congress – one of the largest business events in Central Europe. It is worth emphasising that Katowice has obtained the prestigious title of the UNIESCO City of Music.

If you have any queries or questions regarding investing in Poland, please do not hesitate to contact getsix®.