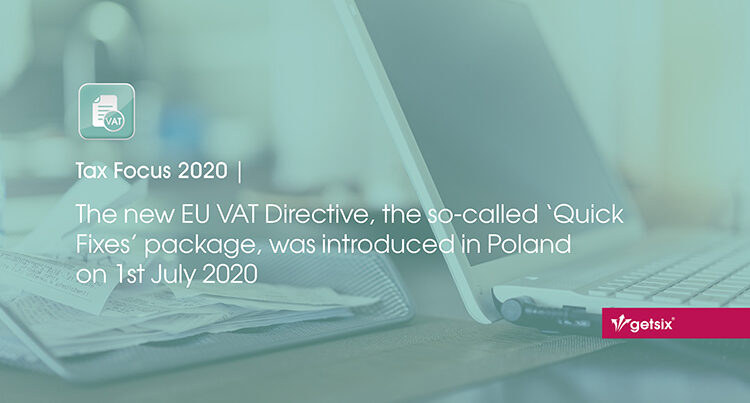 The VAT treatment of chain business transactions has so far caused many doubts and inconsistencies due to the lack of harmonised rules at EU level. Since 1st January this year, amendments to EU Council Directive 2006/112 have come into force as part of the so-called ‘Quick Fixes’ package, which standardise the handling of chain/series transactions in the EU. Poland introduces these changes with a 6-month delay on the basis of the VAT Act, which was amended on 1st July 2020.

The Act published at the end of June this year introduces amendments to, among others, the Corporate Income Tax Act, the VAT Act, the Act on Exchange of Tax Information with other countries and other laws.

This Act will be accompanied by the implementation of a package of changes resulting from EU Directive 2018/1910, the so-called ‘Quick Fixes’, which concerns VAT.

The new regulations have been in force since 1st July 2020.

Below we present the most important information in this respect.

If there are 3 taxable entities involved in the chain (A-B-C) and taxable person A sells the goods to taxable person B (an intermediary), taxpayer B sells the goods further to taxpayer C the goods are sent directly from A to C, and the transport is organised by entity B, then the general rule is to assume that it is transaction A – B “mobile” and is subject to a 0% VAT rate in the country from which the goods were sent.

The key to determining the VAT consequences of chain transactions under the new rules is therefore to identify the intermediary (B) who, by providing a specific VAT-EU number, decides in practice how the transactions in the chain should be taxed.

It is worth revising the existing business arrangements and conditions for the supply of goods to EU counterparties, so that the VAT effects of the new rules are optimal for the parties to the transaction. A practical problem may arise, for example, when an intermediary (B) decides to provide its number assigned in the country of shipment of goods after the invoice has been issued and the transaction settled, which would result in a tax arrears with the supplier, who rightly applied the 0% rate to the supply to them. It is therefore very important to determine in advance which number will be used by the buyer acting as an intermediary and to obtain this number from them.

These changes apply only to intra-EU trade. Chain transactions involving imports and exports will be accounted for according to the existing rules (with any related concerns).

From a VAT point of view, we deal with a ‘call-off’ warehouse when:

The new provisions of the VAT act, which are intended to ensure compliance with the Directive, slightly modified and simplified characteristics of the consignment warehouse, called the ‘call-off stock’ procedure. The most important differences resulting from the new regulations are:

The advantages of the new regulations for entrepreneurs are certainly that:

Introduction of the possibility to re-export the goods. If a Polish taxpayer does not manage to sell the goods at all, they will be able to transport the goods to Poland and will not suffer any consequences as the transaction will be tax neutral.

The downside for entrepreneurs is certainly:

Finally, it should also be mentioned that in addition to the above-mentioned changes, an amendment to the Tax Criminal Code was also made, introducing a new criminal offence, namely failure to report to the tax office on the operations of a warehouse under the ‘call-off stock’ procedure, or to do so in time. The person responsible for such omission will be subject to a fine for fiscal offences.

Rate of 0% for intra-Community ‘Supply of Goods’

According to the published Act – in order to apply 0% rate for intra-Community supply of goods – there is an absolute requirement for the buyer of the goods to provide a valid VAT identification number, as well as for the supplier to submit a correct VAT-EU summary information.

If the above conditions are not met, the 0% rate may be applied only after the taxpayer has explained this defect in writing to the head of the tax office.

At this point, we would like to remind you that the directive was to be implemented in EU countries by 1st January 2020. Nevertheless, Poland did not meet this deadline and therefore at the end of 2019. The Ministry of Finance issued an announcement at the end of 2019. The taxpayer could choose – and then consistently apply in all aspects related to the VAT settlement of a given transaction – whether to apply the provisions of the Directive or the existing provisions of the polish VAT Act from 1st January 2020.

From 1st July 2020, the taxpayer will be obliged to apply only the new provisions of the VAT Act.

NewsletterPrivacy PolicyTerms and conditions for the processing of personal data