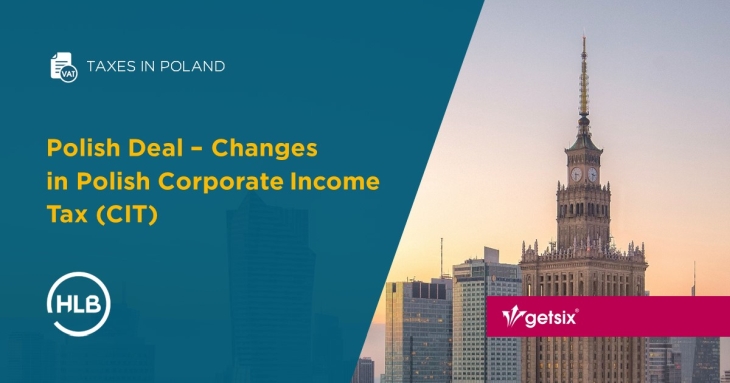 On November 15, 2021 the President signed into law the Act of 29 October 2021 amending the Personal Income Tax Act, the Corporate Income Tax Act and certain other acts (Polish Journal of Laws 2021, item 2105), which is part of the program known as the “Polish Deal” and introduces a number of changes in Polish tax regulations, most of which are to be effective from January 1, 2022 onwards.

We present the most important changes to the Polish corporate income tax (CIT) introduced by this Act:

Introducing a definition of company management board in Poland

So far, the regulations specified that taxpayers are subject to taxation on their total income, regardless of where it is earned, if they have their registered office or management board within the territory of the Republic of Poland.

The introduced change aims at taxing in Poland the income obtained by companies established abroad and formally having their registered office abroad, but which are in fact managed from the territory of Poland.

A simple joint-stock company, a limited joint-stock partnership and a limited partnership have been added to the list of entities that may opt for the Estonian taxation model. However, it should be remembered that the condition which must be fulfilled in order for the companies to be able to apply the flat-rate taxation to their income is that their owners (shareholders, partners respectively) may be exclusively natural persons.

The principle according to which the lump-sum tax on income could be chosen only by those companies whose total revenue from business activity in the previous tax year did not exceed PLN 100,000,000 was abandoned.

The requirement for lump-sum companies to incur investment expenses at a certain level was abolished. Currently the company will be able to benefit from income taxation in this form even if it does not incur any costs of fixed assets acquisition.

Modification of the principle of accounting for the compensation of results when a company opts for a lump-sum tax on its income.

The choice of the lump-sum taxation involves the necessity of equalization of the financial balance result and the tax result, which has so far led to an additional tax obligation.

After the introduction of amendments, the taxpayer, in compliance with certain rules and using a lump sum from income of companies for at least four consecutive years, may not pay tax determined on the basis of income and costs defined within the equalization of the financial balance results and tax results.

The rate of tax paid as a lump sum on corporate income will be 10% for small taxpayers and 20% for others.

Change in the rules of taxation of profit generated but not distributed during the period of application of the flat-rate taxation.

Alternatively, the taxpayer may pay the tax before disposing of the income, by the end of the third month after the end of the year of application of the flat rate.

Change in the definition of taxable “hidden gains”

Under the new law, taxable hidden gains additionally include:

In case of such disposition of the company’s property, tax liability will arise.

Change in the scope of PIT taxation of partners

A 19% flat-rate income tax is levied on income earned by a shareholder from distributions of distributed profits of a company – earned by the company in the period of lump-sum taxation on company income.

The change concerns the rules determining the possibility of deducting this tax.

According to the new regulations, if the company distributing profit is a small taxpayer, the tax is reduced by the amount constituting 90% of the amount corresponding to the multiple of the shareholder’s percentage share in the company’s profit, calculated as at the date on which the shareholder acquired the right to the distributed profit payment and the due lump-sum tax on the companies’ income from the distributed profit of that company, from which the income was derived.

For companies that are not small taxpayers, the reduction will be made using a ratio of 70% instead of 90%.

The legislator has introduced the so-called minimum income tax, which will apply to domestic taxpayers, tax capital groups and foreign taxpayers conducting their business activity through a permanent establishment located in Poland.

Taxpayers who start a business during the first three years of its operation are excluded from this tax. The subject exclusion also includes financial enterprises listed in the Act and taxpayers whose income in the tax year is at least 30% lower than the income earned in the previous year.

Taxpayers whose partners are exclusively natural persons are also excluded from the minimum income tax under certain conditions.

The tax base shall be reduced by:

A holding company means a limited liability company or a joint stock company being a taxpayer with Polish tax residency and meeting the conditions specified in the act, the basic one of which is holding, for an uninterrupted period of at least 1 year, directly on the basis of ownership title, at least 10% of shares (stocks) in the capital of the dependent company.

The preferential system of taxation of the income of such a company consists in:

However, the application of the aforementioned preferences depends on the fulfillment of numerous conditions provided for in the act.

Facilitation of establishment and operation of tax capital groups

The changes are designed to ease the conditions for setting up and operating tax capital groups and to protect them against the tax consequences of a temporary decrease in their profitability. The changes will also enable smaller entities to form tax groups.

The catalog of changes in this area includes:

Due to previous interpretation doubts regarding the regulations limiting the possibility of including the costs of debt financing as tax deductible costs, the legislator clearly indicated that the costs of debt financing should be excluded from tax deductible costs in a situation where they exceed PLN 3,000,000 or an amount calculated in accordance with the formula indicated in the Act.

It is possible to deduct from income the amount of up to PLN 250,000 spent on the purchase of shares in a company engaged in or supporting an activity identical to that carried out by the taxpayer, provided that the shares purchased must give the taxpayer an absolute majority of voting rights in the acquired company.

We encourage you to read our brochure. Beside you will find an excerpt from this brochure: Changes in Polish Corporate Income Tax (CIT) introduced by the "Polish Deal" programme from 01.2022. 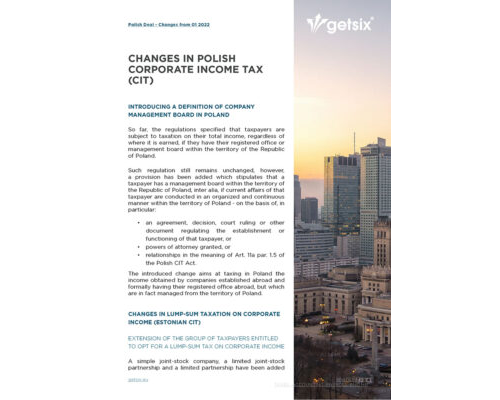 If you have any questions regarding this topic or if you are in need for any additional information – please do not hesitate to contact us: 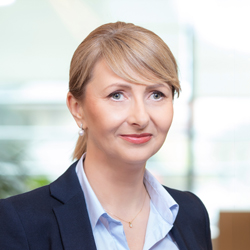 NewsletterPrivacy PolicyTerms and conditions for the processing of personal data